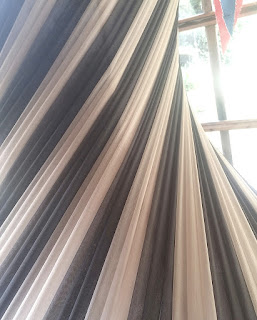 In  between the excitement and busy-ness of launching an upholstery school*, I have actually been working on My Book.

This most recent chapter – which will end up somewhere near the end of the book – has been an experiment in bringing 1950s era swathed pleated shades out of their dusty vintage doldrums. It's a challenge indeed, as those wonders of folded gold and pink chiffon are beautiful. 60 years on, however, even the best-kept are dusty.

It is time for a renewal.


I decided to emphasise the swathed pleat-iness further by using candy-cane stripes of colour. In practice this isn't as tricky as it may sound: work a few pleats in one colour; stop; start again with another strip in a different colour. Once you read the chapter, it'll be easy, promise!

Swathed pleats work on two levels. Firstly, it is the angle of the folded pleat that allows the fabric to hug the curve of the shade. This is most important because the beauty of a vintage bowed empire shade is in its very tiny Marilyn Monroe waist... it’s right and proper to show it off.

On my particular vintage shade, the correct swathe was two and a half panels. It was at this angle that the middle of the pleat just skims the centre of the bowed vertical strut.

The fact that the top ring is double the diameter of the bottom ring, makes the stripes sweep outwards towards the bottom, emphasising the corset shape. 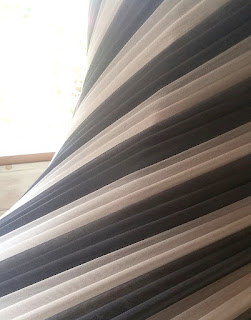 Colours were carefully considered. As well as being successful in its own right, this shade also has to be a balanced contribution to My Book. A subtle combo of shades would be cowardly. I needed to steer clear of 50s pinks and golds. Blues and greens are required elsewhere...

So black and white it is, or actually a much softer version in Pongees' ‘charcoal’ and ‘pearl’ French chiffon.

Once I'd made a start, I began to worry about how the raw edges of the black fabric would look when lit from behind? Surely they would be visible. Would they look crappy? Perhaps I should have chosen not-so-contrasting shades?

Happily, after working a few stripes, I shone a bulb through and the multitude of folds blended away any obvious evidence of raw edges, especially higher up where the fabric is most dense. That said, I paid particular attention to making sure that my strips were very neatly cut.

Time for a tip…

'Oh no..!', I hear you cry, 'Perfect edges are easier said than done with silk chiffon, which jumps about and wriggles and creates a jagged cut line even under the sharpest of blades.'

The answer, lovely lampshaders, is to draw out a single thread of the silk which will give you an even line to cut along. I found that drawing a single thread out of more than 40cm was tricky without it snapping, but even so, you have enough of a line to follow.
(Do remember, this chapter will be towards the end of the book where the tricky projects live.)

I mentioned that swathed pleats work on two levels and here's the second.
By folding the fabric, light plays through the layers creating patterns as the density changes. Indeed, a swathed shade is all-glorious when lit. This is also explains why sheer silk chiffon is the ideal choice.

I decided to push this theory when I considered my lining. I happened to have some ivory coloured sheer Japanese cotton voile with a floral self-colour pattern. Rather than hold up the creative process by ordering something plain, I plunged on in and am really please I did. Look…

And this is where I've got to…

It's not finished as I haven’t chosen a trim yet, but there comes a point when you can do too much on a shade. I may well have a little potter through Houles' scrumptious catalogue. Today I like this one...

Another tip…
When not fiddling with your lampshades it's wise to keep them under wraps. This isn't because of creative espionage, but because house flies think it’s funny to sneak into sheds through open windows and poo on lampshades. Not funny at all!!!!

The Traditional Upholstery School* opens its doors this September with classes, courses and workshops in traditional and modern upholstery, soft furnishings and lampshade making.
While such busy-ness has been all-consuming, my creative doings in the Shed have become a retreat from the lists, mis-functioning email accounts and such-like time-consuming tasks.